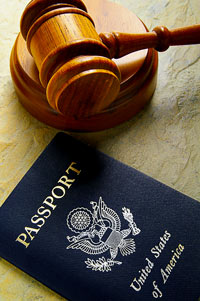 An individual may be eligible for a US green card (lawful permanent residency) if certain legal requirements are met. There are different paths to a "US green card". An individual may be sponsored by a family member or an employer in order to obtain a US green card. See Immigrant visas. Persons granted asylum or refugee status in the U.S. may be eligible to adjust their immigrant status to one of a permanent resident (green card). There can be a Diversity Visa Lottery Program option (USA green card lottery). An immigration attorney can review the circumstances of an individual case and recommend available options.

Law firm of Alena Shautsova offers help from experienced New York lawyer that will help you through the process of acquiring US green card.

Our lawyers speak English and Russian.

According to the US Immigration Law, a person applying for a US green card or in other words to adjust his status to one of a permanent resident ("Lawful Permanent Resident status or LPR") while still on the territory of the US, may be called for an interview with an immigration officer.

Usually, this interview is obligatory for those people who are applying for a US green card after getting married to a US citizen.

The interview is a very important, if not the most important step in obtaining the permanent resident status. During the interview, an immigration officer is allowed to ask questions relating to both spouses' applications (forms I-130, I-130A, I-485, G 325 and I-864 Affidavit of support, etc.), as well as questions regarding the way, time and purpose of the entry to the US, and their life together. It is very important to prepare for the interview diligently, because one confusing answer to the immigration officer's question may lead to significant difficulties in getting the US green card.

The difficulties at the time of the interview are usually caused by two main issues. The first issue is when a person applying for the US green card testifies the way so that an immigration officer forms a belief that that person is guilty of false or fraudulent misrepresentation. The legal standard of what constitutes false or fraudulent misrepresentation is defined by INA §212 (a)(6)(C), and is a material misrepresentation committed willfully, usually to a government officer that cuts off a line of inquiry. The INA §212 states two main kinds of misrepresentation: one for the purpose of procuring visa, entry or admission to the US; and the other one for the purpose of falsely claiming citizenship. Once an immigration officer has made such a determination in connection with a person's application, it makes the whole immigration process significantly harder and longer.

Often, after such determination, the officer will offer the parties to come on a new date with the filled form I-601. Form I-601 is used to apply for 212(i) waiver, which is used to overcome the bar of inadmissibility after the negative determination discussed above. A positive determination on 212(i) waiver will allow the person to remain in the country and get the LPR status, but it is hard to receive it. A person will have to show that his US citizen or LPR spouse or parent will face extreme hardship with his/her deportation – a standard defined by law. In short, in most cases, advice of an immigration attorney can help avoid this whole line of confusion and challenges.

The second negative issue that may result from the lack of preparation for the interview, is when an immigration officer has a reason to believe that the parties did not enter into a bona fide marriage. In this case, usually, the officer will first, before denying the application completely, offer the couple to come on a new date for what is known as Stokes interview. During this interview the spouses will be questioned in separate rooms about the details of their marriage and their answers will be compared by the immigration officer. The differences in answers may lead to a negative determination on one's application for the LRP status.

It is important to know that some officers do not possess the necessary preparation, and person's confusing answers may just worsen a very simple situation. Assistance of an experienced immigration attorney armed with the detailed knowledge of Immigration laws may turn around a challenging case.

US Green Card Read All Publications