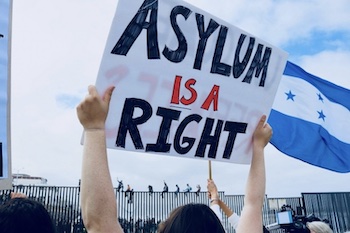 Terrorism in Afghanistan is almost no longer news, especially with the Taliban having laid siege to the entire country. The fear of the worst has caused a lot of Afghans it to flee the country and seek refuge in other places. Many of them understandably fleeing to the United States. With this rapid development in fleeing migrants, it is expected that the United States of America will put regulations in place to manage the flow of migrants from a country quickly becoming popular for its terrorist activities. The USA already has certain immigration programs in place such as Special Immigrant Visa, Temporary Protected States, Parole and Asylum that can help qualifying Afghan nationals to receive legal status in the United States.

To ensure safety of the US residents, special legal provisions disallow certain nationals to receive status in the US if certain indicators are triggered: the Terrorism-Related Inadmissibility Grounds (TRIG). The TRIG aids in the screening of immigrants from Afghanistan who are seeking asylum in the United States. However, the act is very strict, and at times can disqualify people from getting asylum in the United States even if they involuntarily had to give a bribe to terrorists. Due to the strict provisions of the Act, many immigrants have over time been refused asylum when it should not have been.  For example, under the TRIG standard, a noncitizen “engages in a terrorist activity” if, among other things, the person commits “an act the actor knows, or reasonably should know, affords material support” (1) for the commission of a terrorist activity, (2) to an individual who the actor knows, or reasonably should know, has committed or plans to commit a terrorist activity, or (3) to a terrorist organization. INA § 212(a)(3)(B)(iv)(VI)(dd). Under the Consolidated Appropriations Act of 2008, Congress mandated that the Taliban be considered a Tier 1 terrorist organization.    The BIA also ruled has held that there is no implicit “duress exception” to applicability of the “material support” bar to asylum and that there is no “de minimis exception.” Matter of A-C-M-, 27 I&N Dec. 303 (BIA 2018).  As such, if an ally had to have pretty much any contact with Taliban, such a person would be automatically disqualified from asylum.

Because of this, new exemptions were added to the Terrorism-Related Inadmissibility Grounds (TRIG) to accommodate a wider range of Afghans who are seeking asylum in the United States.

These changes to the Terrorism-Related Inadmissibility Grounds to aid Afghan allies came as much relief to immigration advocates when it was announced by the Department of Homeland Security and the Department of State on June 14, 2022. Following the announcement, the exemptions were added to the Federal Register on June 23, 2022.

The New Exemptions to The Terrorism-Related Inadmissibility Grounds to Aid Afghan Allies.

1. Afghans who supported the United States military interest, especially those who fought with or supported the resistance movement against the Taliban as well as Afghans who opposed the Soviet Union's occupation of Afghanistan. The exemption rules out anyone who attacked civilians or opposed U.S. interests, as well as those who committed acts of human rights violations and acted under the canopy of an identified terrorist group.

2. People who worked as civil servants in Afghanistan from the period spanning September 27, 1996, to December 22, 2001, or any time after August 15, 2021. This includes teachers, professors, postal workers, doctors, and engineers. Nonetheless, the exemption rules out anyone who held a high-ranking position or worked for certain government ministries under the Taliban administration or directly aided brutal Taliban activities, or individuals whose civil service functions were a result of their Taliban allegiance or loyalty.

3. The third part of the exemption includes individuals who offered insignificant or limited material support to a designated terrorist organization. Such support includes cases where it is deemed little and insignificant to a normal social and commercial transaction; incidental to some humanitarian aid; given in reaction to a reasonably apprehended danger of physical or economic harm, restraint, or substantial harassment. If serving the Taliban at one's place of business would endanger one's livelihood, this could include paying a fee to obtain a passport or other identity documents required to leave Afghanistan. Other examples include paying a small amount to the Taliban to use utilities like electricity or the telephone. This exception does not apply to anyone who has endorsed the Taliban's beliefs or goals, given them special treatment, or sought to promote the Taliban by their actions.

There is no particular procedure for applying for an exemption. Instead, the USCIS is left to decide when considering immigration benefits, if the person is qualified for an exemption or not. For an applicant to benefit from the exemptions, they are required to fully divulge information on all forms of material support provided and/or contacts with terrorist groups and their members. This is to be done when filing relevant applications and/or taking interviews.

Undoubtedly, the announcement of the new exemptions was a welcome relief for Afghan allies who in previous circumstances would not be permitted protection from the U.S. government due to the rigidity of the Terrorism-Related Inadmissibility Grounds(TRIG).

It is highly recommended that attorneys working with Afghan clients should pay keen attention to the Terrorism-Related Inadmissibility Grounds guidelines. The attorneys should make sure to get information on their involvement with terrorist groups, especially the Taliban. Situations such as giving a brine to pass through a checkpoint, paying for passports to the Taliban, paying the Taliban to identify a document, or paying to get access to basic utilities should be properly communicated. Such situations should not be held back when applying for asylum, Temporary Protected Status, or adjustment of status. This is to allow the applicant fully gain from the above-stated exemptions.

Due to the circumstances currently surrounding Afghanistan, it is only fair that room is made for fleeing immigrants who have no direct involvement with the Taliban or are in support of the group.