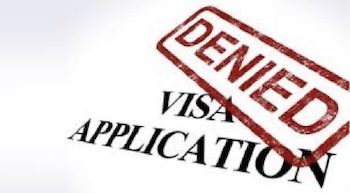 What can be more exciting than after months, perhaps years of waiting, document collection, and hundreds of dollars in filing fees is to finally attend your US visa interview? The only thing that can beat this excitement and thrill, would be a deep disappointment if one’s visa application is denied. And of course, as with all really bad things in life, for most visa applicants, it happens unexpectedly. After all, if those visa applicants were aware of an upcoming denial, they would have been prepared leaving no chances to a surprise, in most cases. A US visa denial can be devasting, but in many situations (not all) can be overcome. Let’s see why one may get a denial, the most common reasons for a US visa denial, and possible solutions.

All US visas can be divided into two big groups: immigrant and non-immigrant, and a possible reason for a  denial will depend on in which group one’s visa application falls. (Examples of non-immigrant visas would be B1/2, F1, J1.) For some denials, a waiver may be available; for other denial reasons: a re-application may be on the table; then there is a possible of argument with the LegalNet for some cases; and in some situations, no waiver is available and an applicant is facing a life time bar on coming to the US.

The most common denial for a non-immigrant visa denial would be INA 214(b) denial, or denial due to applicant’s failure to establish ties with his/her country and overcome a presumption of immigrant intent. The law states:

…” (b) Every alien (other than a nonimmigrant described in subparagraph (L) or (V) of section 101(a)(15), and other than a nonimmigrant described in any provision of section 101(a)(15)(H)(i) except subclause (b1) of such section) shall be presumed to be an immigrant until he establishes to the satisfaction of the consular officer, at the time of application for a visa, and the immigration officers, at the time of application for admission, that he is entitled to a nonimmigrant status under section 101(a)(15). An alien who is an officer or employee of any foreign government or of any international organization entitled to enjoy privileges, exemptions, and immunities under the International Organizations Immunities Act, or an alien who is the attendant, servant, employee, or member of the immediate family of any such alien shall not be entitled to apply for or receive an immigrant visa, or to enter the United States as an immigrant unless he executes a written waiver in the same form and substance as is prescribed by section 247(b).”

There is no waiver for the denial grounds based on INA 214(b), and no appeal is available. However,  it is possible to reapply and submit a new visa application, when an applicant’s situation changes substantially.

But 214(b) is not the only reason why a non-immigrant visa may be denied. Another frequent reason for not receiving a US visa would be a rejection under 221(g): technically, it is not a denial but a long processing of the visa application usually related to extended background checks. In this case, a LegalNet inquiry may help to resolve the situation, but not always.

If, however, one’s non-immigrant visa application is denied for another reason, a non-immigrant waiver may or may not be available. As a rule, a denial letter (which everyone who did not receive a visa should request from a consulate if it was not provided to them) would specify the exact reason for the denial and if a waiver is or is not available. A non-immigrant waiver may allow those who were found inadmissible based on fraud and misrepresentation grounds, controlled substance conviction, and/or even aggravated felony conviction to come to the US for non-immigrant purposes. But in some situations, no waiver is available. Examples: a person is found to be subject toa permanent bar, or a person claimed to be a US citizen (unless a very narrow exception applies). The good news here is that for a non-immigrant waiver an applicant does not need to have a qualifying relative in the US who he/she has to demonstrate hardship to. The bad news, is that non-immigrant waiver cannot be used for an immigrant visa or adjustment of status.

Immigrant visas may be denied for different reasons. Typically, it would be a finding of fraud/misrepresentation, conviction of some offenses that make one inadmissible, or, being barred from applying for a visa due to a previous removal. For some denial reasons, a waiver may be available, for othersb not. Even if a waiver is available, not everyone will actually qualify for it, because to qualify for an immigrant waiver, a person would have to have a qualifying relative in the US, in most situations a US citizen or permanent resident spouse or parent. Typically, a person would file for an Immigrant waiver after receiving a denial, even if she/he expects his case to be denied and submits their visa application without having the waiver granted first. At times, a person may submit an argument to LegalNet arguing the legal basis for the waiver need or finding of inadmissibility. For example, a person may argue that a particular conviction does not make him/her inadmissible; or that fraud was not material and also should not cause inadmissibility findings. This approach may be the only solutions if one was accused, for example, of claiming to be a US citizen. A specific solution, if any, shall be chosen with an Immigration attorney having experience in such matters.